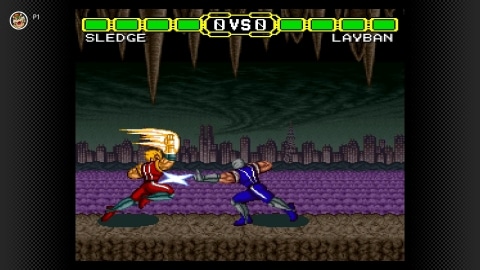 REDMOND, Wash.–(BUSINESS WIRE)– On Feb. 17, visit worlds virtual, fantastic and oddly familiar when three Super NES™games and one NES™ game join the Nintendo Switch Online service. This selection of unexpected, action-filled adventures will challenge you to summon whatever it takes to save the Earth, your prehistoric village, a magical island, or someone lost in a terrifying virtual fantasy.

On Feb. 17, DOOMSDAY WARRIOR, an action game in which you alone stand against the powerful Doom Squad and their quest for world domination, joins the Super Nintendo Entertainment System – Nintendo Switch Online library. (Graphic: Business Wire)

Available for the first time in the U.S., Psycho Dream is arriving to the Super Nintendo Entertainment System™ – Nintendo Switch Online library! Originally available on the Super Famicom™ system in Japan, Psycho Dream is a reality-bending action platformer that sends you into a virtual fantasy game to rescue a missing person.

Also joining the Super NES library are DOOMSDAY WARRIOR, an action game in which you alone stand against the powerful Doom Squad and their quest for world domination, and Prehistorik Man, a colorful action game that tasks you with saving your village from hungry, hungry dinosaurs.

Plus, Fire ’n Ice, the magical, flame-fighting puzzler that lets you create cool puzzles of your own, will be arriving for the Nintendo Entertainment System™ – Nintendo Switch Online collection.

With these new additions, a Nintendo Switch Online membership will grant instant access to 99 classic games, with libraries that run the gamut of cult action hits, touchstone fan favorites and U.S. debuts of notable games from the classic era of gaming.

Read on for additional details about the games arriving this month:

All of these games are playable with a Nintendo Switch Online membership, which offers access to libraries of classic Super NES™ and NES™ games, such as The Legend of Zelda™: A Link to the Past™, Donkey Kong Country™ and Super Mario Bros.™3.

The paid online service is also a great way to connect and play compatible games online with friends and family around the world. With online play in compatible games like Animal Crossing™: New Horizons, Pokémon™ Sword, Pokémon™ Shield, Super Smash Bros.™ Ultimate, Mario Kart™ 8 Deluxe, Tetris 99® and many others, a Nintendo Switch Online membership can help you experience everything Nintendo Switch has to offer.

A Nintendo Switch Online membership also offers access to the competitive online battle game Super Mario Bros.™ 35, playable through March 31, 2021. Compete with other players to emerge as the last Mario standing. Keep an eye out for regularly held Special Battles in which you can challenge other players in a set order of courses and special conditions. Put your Mario skills to the test as Super Mario Bros. gets turned on its head for the ultimate battle royale.